Posted at 14:16h in Research by Tracie Luedtke
0 Likes

By Terry Devitt, University of Wisconsin-Madison

Less than two years after the first report of wild chimpanzees in Uganda dying as a result of a human “common cold” virus, a new study has identified two other respiratory viruses of human origin in chimpanzee groups in the same forest.

Writing in the journal Emerging Microbes and Infections, a team led by Tony Goldberg, a University of Wisconsin-Madison professor in the School of Veterinary Medicine and an expert on emerging pathogens in animals, describes two simultaneous outbreaks of respiratory illness in chimpanzees in the wild, one of which was lethal.

The outbreaks affected different chimp communities in the same forest at the same time, between December 2016 and February 2017, prompting suspicion that the outbreaks had a common cause. 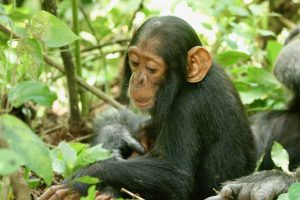 One group, consisting of 205 chimpanzees known as the Ngogo community in Uganda’s Kibale National Park, was especially hard hit, with almost 44 percent of animals suffering from respiratory illness. Twenty-five chimps in the Ngogo group died during the outbreak. The other group of chimpanzees, known as the Kanyawara community and consisting of 55 animals, experienced an outbreak where a little more than 69 percent of animals were affected by respiratory illness. In contrast to the Ngogo group, no animals from the Kanyawara community died of the disease.

In both instances, scientists caught a break through the quick recovery of the bodies of deceased chimps for post-mortem exams by veterinarians, allowing for “a rare direct comparison.”

Viral genetic material from the Ngogo chimps revealed infection by metapneumovirus, which is known to cause deadly disease in chimps across Africa. Surprisingly, the Kanyawara chimps contained the genetic material of a different virus, parainfluenza virus 3.

“These are very common human viruses that circulate worldwide,” Goldberg says. “In people, they are no big deal unless the patient has asthma or another underlying condition.”

In chimpanzees, however, the viruses were much more virulent. “The chimps cough and sneeze and lie on the forest floor looking miserable,” he says. “And they lose a lot of weight.”

According to Goldberg, a human origin for both viruses can be inferred because the viruses in the chimps were nearly identical genetically to common strains found in people.

A group led by Goldberg was also the first to identify another human cold virus infecting and killing chimps in Uganda in late 2013 – rhinovirus C.

“The viruses responsible this time aren’t even remotely related to rhinoviruses,” Goldberg notes. “So, it seems like a plethora of common and mostly benign respiratory viruses of people can be transmitted to chimps in this part of the world, causing disease and sometimes death.”

Although people are the sources of these viruses, it is not clear how they are getting into chimps.

“It could happen in any number of ways,” says Goldberg. “Local villagers, researchers, tourists, and many other people visit forests where apes live. All it takes is one person unwittingly carrying a ‘common cold’ virus to spark a deadly outbreak in apes.”

Governments and conservation groups across Africa are working to avoid similar outbreaks. Current regulations include quarantine periods for people entering the forest, the use of face masks and hand sanitizers, and strict policies about distances that tourists must keep from apes.

“The more we can learn about these outbreaks,” says Goldberg, “the better prepared we will be to prevent them and to protect the health of apes.”