Posted at 12:48h in WVMA News by Tracie Luedtke
0 Likes 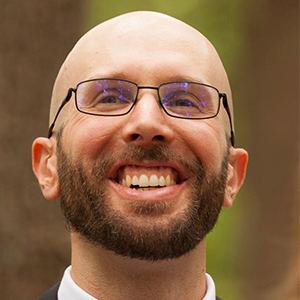 University of Wisconsin School of Veterinary Medicine (UWSVM) student Jon Young was elected by his peers to serve a two-year term as the student representative on the WVMA Executive Board.

Young, who grew up in a small southeastern Connecticut town, received his undergraduate degrees in Sociology and Economics from Gordon College in Massachusetts. Following graduation, he spent 10 years in a variety of roles that included teaching English in Palestine, serving as an AmeriCorps VISTA member in Pittsburgh, working for a willow artist in the United Kingdom, running an afterschool program in Boston and working for the Natick Community Organic Farm (NCOF) in Natick, Massachusetts.

It was Young’s job as livestock manager at NCOF that sparked his interest in veterinary medicine, and that led him to begin taking courses at his local community college.

“We had a diverse but small population of creatures and they were integral to the mission of the farm,” Young says. “I think most people would agree that when your animal has a problem, you have a problem, regardless of whether it be a companion or production animal. Through some remarkable interactions with Dr. Rosario Delgado-Lecaroz, I understood the role of the veterinarian as specializing in one particular way of helping folks through some troubling times.”

In July 2018, Young and his wife, Kori, and their dogs, Ember and Queenie, moved to Madison so he could attend veterinary school. He says a career as a veterinarian will provide the right mixture of creativity, critical thinking and hands-on work that he had been searching for.

Young is looking forward to his WVMA Executive Board term. He plans to use his role both to bring information back to his SVM colleagues about the issues the veterinary medical profession is currently facing and to advocate for the challenges he and his colleagues are likely to face in the future.

“I want to learn what the people at the forefront of the profession are working on and how they integrate policy, veterinary medicine and outreach,” he says. “The impacts of climate change and artificial intelligence on veterinary medicine are as hard to predict as they are likely to be profound, and I’m excited to be in a room full of people who are in a position to shape how the profession responds to what is on the horizon.”

Young is leaning toward practicing production animal medicine after graduation, but says he is not ruling anything out at this point. In the meantime, he’s learning as much as he can and trying to take advantage of the opportunities he’s being given at the UW.